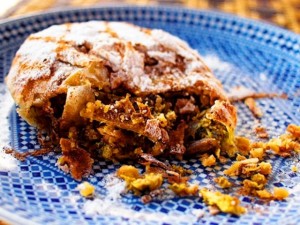 Boil chicken in enough water to cover along with the chopped onion and spices until cooked, about 30 minutes. Drain chicken, reserving ¼ -1/3 cup of the cooking liquid. Bone the chicken and cut the meat into small pieces.
Cook eggs, along with ¼ – 1/3 cup reserved cooking liquid from chicken in a large skillet until soft scrambled, do not overcook the eggs. Mix cooked eggs with chicken meat until well combined.

Process almonds, sugar and cinnamon in a food processor until almonds are crushed.

Lay the filo dough on a round pan so that they overlap in the middle and spill over the sides.

Spread about 1/3 cup of the crush almond mixture over the filo, followed by the chicken egg mixture, followed by another layer of almonds.

Fold over the filo dough to cover and brush with butter

Bake the bastilla in a 350° oven for about 12-15 minutes or until lightly browned. Turn skillet upside-down on plate to remove bastilla.
Sift a heavy layer of confectioner’s sugar over the Bastilla viagra genérico portugal. Pinching cinnamon between your fingers, draw a criss-cross pattern of cinnamon over the layer of confectioner’s sugar. Take a paper towel and wipe away excess sugar from the edges of the plate. Serve immediately.