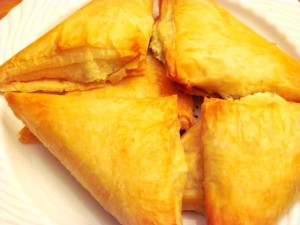 This recipe has lightened up on the traditional recipe by using EVOO instead of butter, Egg whites instead of whole eggs, and a few other tricks

For Spinach Pie use basic recipe and add:

For a Desert Pie use basic recipe and add:

Preheat your oven to 400 degrees.

In a bowl, mash the feta cheese with the cottage cheese, egg whites, pepper.

Start by cutting your roll into 2 or 3 even segments to create strips. 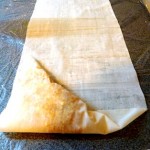 Take a strip and roll out your Phyllo dough.  Keep a damp cloth handy to cover the filo when you are not using it to prevent drying and cracking.

Take one single strip and apply some EVOO.  Add another strip on top of it and add a bit more EVOO.

At one end, add a tbsp of the filling and begin folding over onto itself to create a triangle.

Continue folding over until you reach the end and you have a triangle.  Tuck or cut any loose ends.

Brush a bit of EVOO on the finished triangle

If you are making multiple styles, you may want to differentiate between pies by sprinkling sesame seeds or cinnamon.

Lay the pies in an oiled baking tray and bake in the oven for 30 minutes or until brown and crisp.

For a large pan: