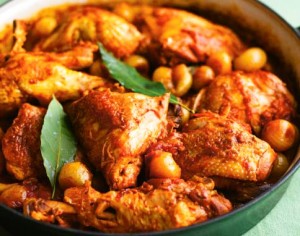 Optional: Serve kokkinisto with Orzo pasta mixed into it.

Heat up about 1/4 cup olive oil in a pot. Add onions and cook well until browned. Move the onions aside or remove them from the pot and begin to brown the beat on all sides.

Once meat has browned, smash the whole canned tomatoes with your hands and place into the pot along with the can of tomato sauce, tomato paste, red wine, chopped garlic, cinnamon, oregano, bay leaves, salt & pepper.

Bring the stew to a boil and reduce to a simmer, cover, and let cook for at least 1 hour, depending on the type of meat used. Tougher leaner meats may take up to 3 hours to soften, while rabbit shouldn’t take more than an hour. Make sure to check the meat and stir the stew occasionally.

You should be able to taste the cinnamon in the stew, so re-season if needed. The stew should be fairly thick, so you may want to uncover the pot towards the end of the cooking process to allow it to reduce.

Optionally, you can boil some orzo pasta in a separate pot. When the pasta is not quite al dente, or about 80% done, remove it from the pot, strain it, and set it aside. When the kokkinisto is ready, drop the pasta into the stew and let cook for another 10 minutes, allowing the orzo to cook fully.

Fattier cuts of meat should be boiled first for about 30 mins prior to browning in order to remove some of the fat.